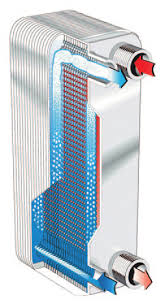 The Brazed Plate Heat Exchanger are formed as geothermal heat pump that uses one electricity unit for retrieve from the earth up to three units. This heating can help in improving humidity control as well by maintaining indoor humidity of about 50%, making these pumps helpful for humid climates. Such pumps are built on the basic principles of the regular heat pumps.Brazed plate heat exchanger were placed in three geothermal fluids are Klamath Falls, Boise, ID and Pagosa Springs, CO in order to determine the effect of H2S on braze material.

Based on subsequent analysis, it appears that the rate of corrosion of the braze material is much slower than corrosion of copper tube materials in the same fluids. The only difference is that rather than drawing heat from outdoor air the geothermal draws it from the earth, as it is thought to be even and stable. The geothermal heat pumps are not only restricted to heating, they are used for cooling as well water heaters. These pumps use land mass as a heat exchanger and is operated on the surface. Many geothermal fluids used directly have numerous chemical species that can be harmful to conventional material of construction.

This is the reason that the standard design practice for isolating the geothermal fluid from the system balance via using the heat exchanger. Brazed plate heat exchanger provides different advantages for geothermal heating that also includes their corrosion resistant materials availability such as the titanium, stainless steel, etc. at affordable price. The units are efficient and compact with rates of heat transfer three to ten times than those of tube and shell exchangers.

Minimum expected life of the heat exchangers based on these corrosion rates is reported to be 12 years in fluids of less than 1 ppm H2S and 10 years in fluids of less than 5 ppm. Based on these expected lives, and using a 3% inflation rate and 8% discount rate, brazed plate heat exchangers are a clear economic choice in which the capital cost is 50% or less of the cost of a plate and frame heat exchanger for the same duty. Due to their single pass design, brazed plate heat exchangers are generally limited to approach temperatures of 10 deg or greater. Size limitations restrict applications to 100 gpm and/or 200 sq ft heat transfer surface area.